134 music virtuosos under the moonlight of Houdetsi : Things to do in between appointments

Houdetsi Festival is a free 4-day musical celebration taking place in the begining of August. The small traditional village welcomes visitors and musicians from around the globe 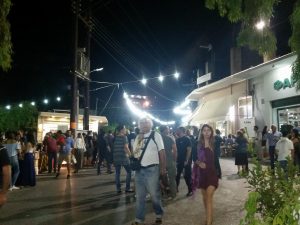 Music is in the air as you walk up the small hilly road to the village of Houdetsi. Young and old, Greek and foreigners, parents and  children, dressed up  in light summer clothes following the thread of music.

And Oop’s there it is!

You turn right into the mystic garden of the Labyrinth. 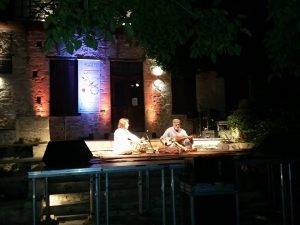 The Rampamp of Daud Khan Sadozai  travels you in the foothills  of the  Himalayas.  Spectators are lured by the strange sounds performed skillfully in the familiar garden of the old stone house under the big  walnut tree. Further up the road in front of the square Ross Daly, dressed in crème talks with his fans.

A music festival directed by the aclaimed irish-born Ross Daly

Ross is the artistic director and “soul” of the festival. Originally from Ireland, has lived in Houdetsi since 1982 where he operates the Labyrinth music workshop.  He views the festival as an opportunity to bring together artists and visitors from all over the world. He feels that their interaction with the Cretan community and the music promotes a constructive, fruitful exchange of artistic values and ideas.

You walk by the square, where several groups are enjoying their dinner. You then turn right into the small road leading to the exhibition. Pottery, jewellery, tapestry, home-made cosmetics and goodies and even instruments crafted by local craftsmen are for sale. A fruitful interchange of local craftsmen and craftswomen with the music fans.  On the three stages that are along the road, the lyra, the saz and the laouto engage in social  intercourse to the ears of the devoted listeners.

Yummy street food is prepared on the spot, in Crete’s most popular music festival 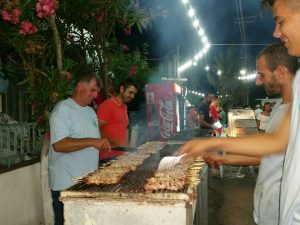 On the other side of the square, children are playing hide and seek, next to the main stage(spiliada), while hungry visitors are enjoying freshly cooked  street-food. Souvlaki on the charcoal, french fries cooked from locally grown  potatoes in olive oil, traditional loukoumades flavored with Cretan honey. But which is the greatest hit with the locals? Surprisingly enough is  falafel- the “vegetarian burgers” of the Midlle East. It is the period of fastening ahead of the assumption of Mary, celebrated on the 15th of August after all. 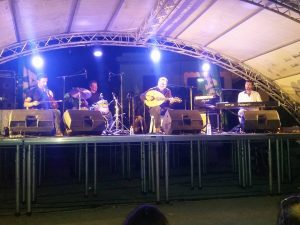 Back in Spiliada, the  band playing Irish folk music just finished  and  now is the turn of Haig Yazdjian band.  The  music of the popular Sirian-Armenian’s mingles the music of the  east mediterranean with that of the middle east. 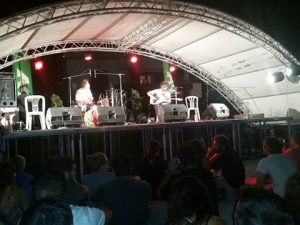 The audience is carried away, but it is the  performance of  Xylouris-White that comes next that attracts the most attention.  Xylouris (or Psarogiorgis), comes from a well known music family of the area. The Cretan lauto player has formed an “exotic” duo  with the  Australian drummer Jim White of the rock band Dirty Three. Their music, full of playful intros and delicate musical motifs, is an intense journey in the east-west conjunction.  That same conjunction that has chararcterised Crete for the last 5000 years.

Houdetsi Music Festival is an unparallel journey of music, aromas and flair in this tiny village well hidden in a slope surrounded by vineyards. Three hours suffice to ramble from the most North-west island to one of the most south east islands of Europe and further ahead to a land down under via the hilltops of Himalayan.

We visited Houdetsi festival on Thursday 4th of August 2016

This site uses Akismet to reduce spam. Learn how your comment data is processed.